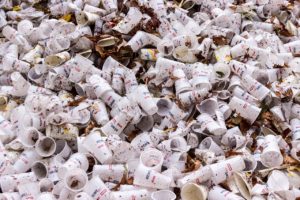 Plastics undergo several processes in order for them to be ready and be used for our day to day activities. We often throw them away after it has outlived its purpose. With that being said, what happens to the plastic that we are disposing of? Let us consider the video entitled, “What really happens to your plastic when you throw it away?” and see the life cycle of plastics and what it does to our planet.

This is the story of 3 plastic bottles, empty and discarded. Their journey are about to diverge with outcomes that impact nothing less than the fate of the planet. But they weren’t always this way. To understand where these bottles end up, we must first explore their origins.

The heroes of our story were conceived on this oil refinery. The plastic in their bodies was formed by chemically bonding oil and gas molecules together to make monomers. These monomers were bonded into long polymer chains to make plastic in a form of millions of pellets. Those were melted at manufacturing plants and reformed in molds to create the resilient material that makes up the triplet’s bodies. Machines fill the bottle with sweet bubbly liquid and they are then wrapped, shipped, bought, opened, consumed, and unceremoniously discarded. And now here they lie poised at the edge of the unknown.

Bottle one like hundreds of millions of tons of its plastic brethren, ends up in a landfill. This huge dump expands each day as more trash comes in and continues to take up space. As plastic sits there being compressed amongst layers of other junk, rainwater flows through the waste and absorbs the water soluble compound it contains and some of those are highly toxic. Together they create a harmful stew called leachate which can move into ground water, soil and streams, poisoning ecosystems and harming wildlife. It can take bottle one an agonizing 1000 years to decompose.

Bottle two’s journey is stranger but unfortunately no happier. He floats on a trickle that reaches the stream. A stream that flows into a river and a river that reaches the ocean. After months lost at sea, he is slowly drawn into a massive vortex where trash accumulates to a place known as the Great Pacific Garbage Patch. Here the ocean’s current will trap millions of pieces of plastic debris. This is one of five plastic filled gyres in the world seas. Plastic where the pollutants turn the water into a cloudy plastic chute. Some animals like seabirds get entangled in the mess. They and others mistake the brightly colored plastic bits for food. Plastic makes them feel full when they’re not so they starve to death and pass the toxins from the plastic up the food chain. For example, it’s eaten by a lantern fish, the lantern fish are eaten by squid, the squid are eaten by tuna and the tuna are eaten by us. And most plastics don’t biodegrade which means they’re destined to break down into smaller and smaller pieces called micro plastics which might rotate in the sea eternally.

But bottle three is spared the cruel purgatories of his brothers. A truck brings him to a plant where he and his companions are squeezed flat and compressed into a block. Okay, this sounds pretty black too but hang in there, it gets better. The block is shredded into tiny pieces which are washed and melted so they become the raw material that can be used again. As if by magic, bottle three is now ready to be re-worn as something completely new. For this bit of plastic with such humble origins, suddenly the sky is the limit.